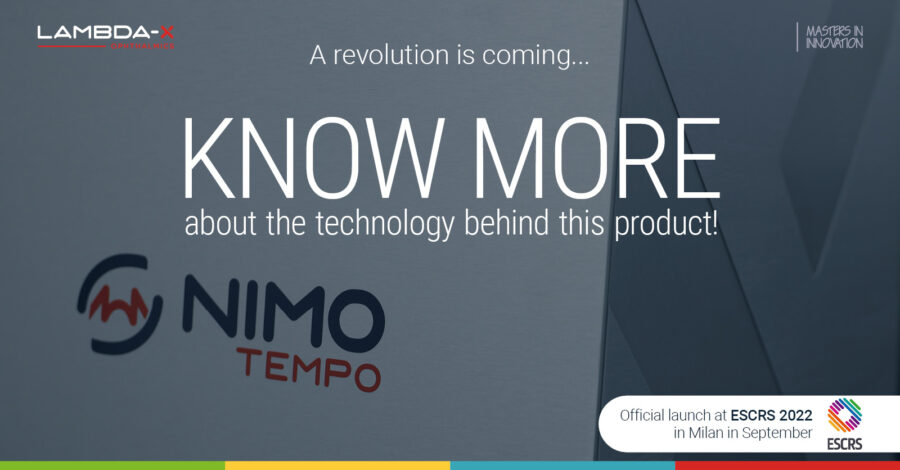 The technical principle behind NIMO TEMPO

NIMO TEMPO® is a wavefront sensor dedicated to the metrology of intraocular lenses (IOLs). It is a very innovative interferometer optimized to measure IOLs of any kind, including diffractive designs. The instrument is controlled by its dedicated software application, TEMPO-MENTOR®, which features all well-known functionalities of the MENTOR software family (CLE, IOL, PMTF) for R&D and Production environments.

The measurement is exclusively made in situ: the wet cell is placed into a glass wet cell (or cuvette) containing saline or deionized water. The wet cell is then inserted into the interferometer. The imaging system then acquires a set of phase-shifted images.

TEMPO-MENTOR® then reconstructs the IOL wavefront and execute sophisticated optical algorithms to compute lens characteristics such as powers, cylinders, addition(s) and MTF related data. The position of the MTF peaks is affected by the IOL power while the height of the MTF peaks is a criterion used to evaluate the IOL imaging quality. In addition, after subtraction of the wavefront envelop, the detail of the diffractive structure can be highlighted.

Thanks to a powerful processing unit and optimized algorithms, the complete characterization of an IOL, including diffractive toric lenses, can be as fast as 20seconds: about 2 seconds for data acquisition, and up to 18 seconds for processing, during which the lens can already be removed from the instrument. This is particularly useful in production where the automatic lens handling is done in hidden time during lens characterization. The acquired data remains available for future processing with other parameters, without the need of the lens to be re-measured.

The processing includes sophisticated ray tracing methods which have been fully validated against Zemax®. It also features a patent pending methodology to simulate the cornea model which, as described in the ISO11979-2 standard, must be placed in front of the IOL to compute the IOL imaging performances in a representative eye. This capability to simulate the model eye independently from the IOL measurement allows, from a unique initial acquisition of the phase-shifted images of the lens, to compute the IOL imaging performance at multiple apertures or with different cornea models without need for additional and time-consuming data acquisition.

In order to know more about NIMO TEMPO and its principle, book a live workshop with our team and see for yourself how NIMO TEMPO can help your team.

No comments to show.